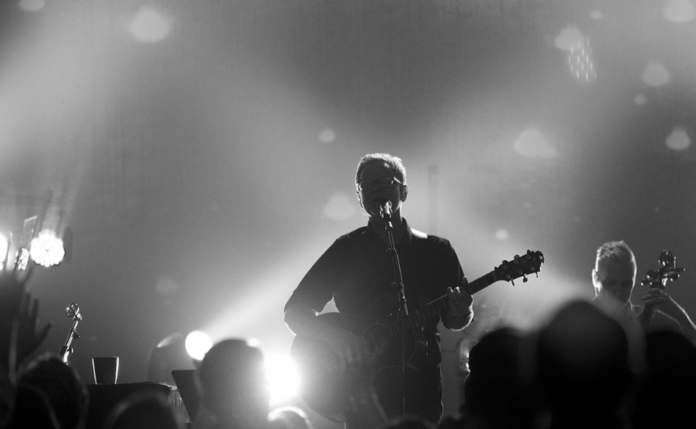 Steven Curtis Chapman performed in Austin at Life Austin Amphitheater last Sunday. The event was part of Chapman’s fall tour, SCC Solo. As Chapman himself said, at the start of the show, when he says “solo” he means “solo”. The entire stage setup included just three acoustic guitars and a keyboard—all played by Chapman at various points.

For a while, there was fear the show might not happen. Not because of the non-stop rain Austin has been experiencing over the past few weeks, but because Chapman’s flight from Phoenix to Austin was delayed. At the time the doors were supposed to open (5:00pm) the singer and his touring crew had yet to arrive. Those of us who arrived early (and there were quite a few), lined up outside the gate in what turned out to be the hottest and most humid day in Austin since August.

Right as Life Austin Amphitheatre staff was finally able to let us in there was a sudden shift in the weather and it felt like the temperature dropped about ten degrees in less just a few minutes. That and a gentle breeze made the prospect of sitting at an outdoor amphitheater a lot more pleasant.

Speaking of the venue itself, if you haven’t been to see a performance at Life Austin Amphitheatre, I highly recommend the experience. Although the amphitheater is outdoors (as implied by the name) the seating area is covered and comfortable and there doesn’t appear to be any bad seats. The staff were helpful and courteous and pitching in to try and make a difficult situation (with the crew being late) turn out much better than expected. It was also the first time I can remember watching a band do their sound check with a live audience.

The Power of Remembering

Chapman rolled into his first song (Live Out Loud) with no introduction and the fast-paced number quickly got the crowd into an excited mood. Afterward, he addressed the late arrival briefly, without going into any details, and smoothly transitioned into what I imagine is his normal conversational routine for this tour.

The multi-GRAMMY® Award-winning artist explained how the idea for this acoustical reminiscence came to him while writing his memoir—Between Heaven and Earth. As Chapman wrote the book, memories that he hadn’t thought about in decades started to flood back to him. Naturally, as a singer/songwriter, he began to associate each of those milestone events with a song that was important to him at the time. This became the theme throughout the evening. Chapman stressed the power of remembering those things from our past that have shaped our lives.

The song Let Us Pray, reminds him of the first time he was able to sing on-stage for Billy Graham. Lord of the Dance is about his birth and early childhood. No Better Place is about his own salvation at the age of eight.  Each memory punctuated with a song. It was a concert and a biography—and very cool to experience.

One of the most poignant moments of the night came when Chapman recounted the memory of his father’s salvation. Until he was around six years old, Chapman’s mother took him and his brother (Herbie) to church every Sunday. His father (also named Herb), always slept in because, as a musician himself, Saturdays were always late nights.

The Moment Everything Changed

After his father accepted Christ, things changed in the Chapman household (For the Sake of the Call). Parental fights began to end with prayer, instead of slamming doors and Herb driving off in his car. God and prayer became a part of their everyday life, instead of just on Sundays.

Steven is sure that his father could have made it in the music business. The man is a talented songwriter and gifted guitar player. Herb Chapman gave up the chase, though, of a recording contract. Instead, he became a Music Minister (what we would call a Worship Pastor). He opened a family music store (Chapman Music in Paducah, KY), and began to teach children how to play guitar.

The elder Chapman never knew his own father and only met him a couple of times. Herb became determined to spend time with his own kids and be the father he never got to know. He understood that a life on the road would be detrimental to a relationship with his children. Through this part of the story, I wondered how Steven managed to overcome that hurdle in his own career. I wondered if he had regrets about the things he missed out on while being on the road himself. After all, he is the best-selling Christian artist of all time with 48 number one hits, 58 Dove Awards and over 11 million albums sold.

Later remembrances included his first performance at the Grand Ole Opry (at the age of 19), where he forgot the lyrics to the song he was supposed to sing; dropping out of pre-med to fall under the mentorship of Bill Gaither; meeting his wife, Marybeth, and asking her to marry him (I will be here); having their first child, Emily (Fingerprints of God). Two more children followed quickly. Before he knew it he had a family larger than the one he came from.

At one point, Chapman played a video montage of him performing live at various events and receiving many of his Dove awards and GRAMMYs®. I couldn’t help but wonder about the different choices he and his father made. He actually kind of set us up to think about it.  I assumed he would circle around to address it more towards the end of the performance. He never did though.

Instead, the show ended in a predictable, but emotional, manner: The story of the accidental death of his adopted daughter (Maria) and the song Cinderella. This was the number many had been waiting to hear and Chapman did not disappoint them. Even after ten years, he sang the song with the ragged emotion of a much more recent tragedy.

It is not always easy to remember.

Jeremy Camp doesn’t write songs for radio: I want to ‘connect with the heart’

Newsboys say they will tour until they are 80: We are just getting started!

Minno is the new streaming platform for Christian kids — and...

Newsboys say they will tour until they are 80: We are...

North Point InsideOut Elevates to Next Level as Nationally-Renowned Band